Coming into the first stage of the 2022 Hyundai Archery World Cup, 16-year-old USA recurver Gabrielle Sasai did not even own a spot in the world ranking.

By the end of the week, she did (88th) but she also had a medal – a bronze won in the recurve mixed team event thanks to her third-place finish with world number one Brady Ellison.

One photo summed up their experience together in Turkey, the photo you can see at the top of this feature, and the story behind that photo is an incredible story of what can happen with hard work, focus, dedication and support.

“Brady was always an inspiration to me as a top world archer from America,” explains Sasai one day after her medal-winning performance.

“I’ve been looking up to him since I was six years old. In my archery school there were many posters of him, and my dad used to make me watch every World Cup when I was younger to learn from [the archers competing]. He was always a familiar face at the top that I would see many times.”

“Now, a decade later I’m 16 and shooting with him,” she continues. “Brady kept me pumped up the entire time [in Antalya] and reassured me that I belonged in the crowd of the world’s best. It, to me, is the perfect way to start my season.”

“I wouldn’t want to share this success with anyone else.”

Ellison, as usual, was his eloquent self about the sporting partnership with Sasai, who is less than half his age.

“It’s kind of funny that everyone likes to point out the date and how old I am and how long I’ve been on tour now,” he said in Antalya with his trademark smile. “She was six and now we’re winning medals together. The fact that I’ve been able to stay on the tour for long enough to experience something like this and seeing these guys come up is pretty cool. I’m glad that I can be an inspiration for them.”

The other big inspiration in Sasai's archery career so far, and the one other person she wanted to share her success with is her dad.

“The first person I texted [after winning] was my dad to ask if he watched me,” adds Sasai. “He was back home, which is 10 hours behind Turkey, but he stayed up into the night to watch and he texted me back a crying emoji and told me that he was so proud of me.”

“Without him driving me to practice, organising all my trips and being my second set of eyes while shooting, I would not be the archer I am today.”

In fact, Sasai’s dad, who used to be a competitive air pistol shooter, introduced her to the bow and arrow at a very young age, by means of a distraction for the then six-year-old.

“I first started archery as a way to get out of the house,” explains Sasai. “My little sister was just an infant at the time and my dad wanted to start a shooting sport again, but I was six at the time so he didn’t feel comfortable bringing me along to a gun range.”

“He chose to start archery at Next Step Archery in Washington state. For a while, I just tagged along and didn’t shoot, until I finally gave in and was convinced to start after seeing their female junior athletes walking by.”

Fast forward a decade, long having grown out of the pink Genesis she began shooting with, Sasai has announced herself on the senior world stage at only her second-ever even outside of the USA.

Last year, paired with Casey Kaufhold, Sasai won recurve women’s team silver at the 2021 Junior Pan American Games in Colombia, losing to the Mexican pair of Valentina Vazquez and Akshara Licea in the final. Before then, she had only left the continent once – when she was just three years old to visit family in Germany.

“I had to get a new passport at the start of the year because I am a minor so my passport expires every five years,” explained Sasai, who turned 16 in March.

“It was very exciting packing for Turkey because I knew this trip was special, more than just a vacation as my peers at school saw it; it was business and work, but I love what I do so I never feel like I’m working and it felt really nice to be in foreign air.”

That air swirling around the beachfront in Antalya proved not to be a problem for Sasai.

“I had no expectations going into this tournament as this was my first World Cup and I came to learn the international archery game,” she explained. “I thought, if I show up and do my best I did my job; if anything more happened it would be the icing on the cake.”

“On the field I learned how to shoot the venue; wind, sun position, layout… I also learned how to deal with shooting at a live senior final,” she added. “Honestly, it was not as nerve-wracking as I had thought it to be and my adrenaline really didn’t kick in until after I finished shooting my round. Once out of the shooting area my heartrate sky-rocketed and my previous calm was gone.”

“On the field, I learned how to shoot the venue; wind, sun position, layout… I also learned how to deal with shooting at a live senior final,” she continued.

“Honestly, it was not as nerve-wracking as I had thought it to be and my adrenaline really didn’t kick in until after I finished shooting my round. Once out of the shooting area my heart rate sky-rocketed and my previous calm was gone.”

That experience can only stand Sasai in good stead going forward.

“My hopes for the 2022 season is to enjoy the experience and to learn as much as I can,” she said.

“Going into each tournament I never have any sort of scoring or ranking goals, I just expect to shoot as well as I can. I know that if I can do that at every tournament then I’ll always be successful, whether that be a top finish or personal achievement it’s all a win to me.” 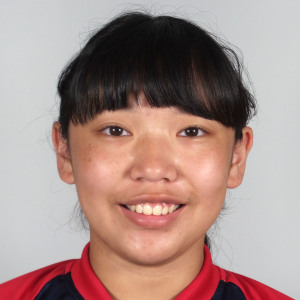