Stationed next to him during qualifications at the Yankton 2021 Hyundai World Archery Championships was Turkey’s Mete Gazoz, competing in his first international competition since winning individual gold at the Tokyo 2020 Olympic Games.

Dorjsuren has never been to the Olympics, and Yankton is his first world championships.

“I’m a little bit nervous,” said the Mongolian recurve man. “There are so many good archers here. I have no idea what to expect.”

But rather than wilt in the Olympic Champion’s presence, Dorjsuren rose to the occasion. The 23-year-old finished ninth on Tuesday with a score of 652 – in ravaging conditions – better than Gazoz and a slew of other accomplished archers with higher profiles than his own.

“It’s really exciting,” Dorjsuren said with a twinkle in his eye. “It’s really, really cool. It makes me feel like I belong.”

Dorjsuren entered the range in Yankton without fanfare, and he was unlikely to garner much recognition during his debut at the event.

But a strong showing to start the proceedings demonstrates that Dashnamjil might be worth a second look.

His qualifying result of 652 is a career-best in competition.

It’s not, in normal circumstances, a total that would impress. But on a day during which only two athletes broke 660, when at a normal international there’d be 50 or more above that score, it’s world-class.

He’ll have a chance to prove that status in matchplay.

By finishing ninth, Dorjsuren received a first-round bye. He will face the winner of a match between Denmark’s Rasmus Brynning and two-time individual medallist Takaharu Furukawa of Japan in the second round when the eliminations take place on Thursday.

“I’m looking forward to it,” he said. “I did enough practice. I think I can shoot an even better score in the future.” 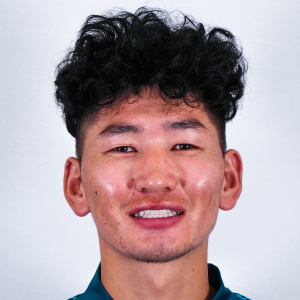