Great Britain’s Steve Prowse won the visually impaired event at the world para championships, when it was organised by the International Paralympic Committee, back in 2007.

There had been visually impaired competition at the worlds two years prior and it was again featured in 2009. After that, it was dropped from the programme due to constrictions in classification and widespread demand – but, six years later, it was announced that visually impaired archery would be returning to the World Archery Para Championships.

At Donaueschingen 2015, ’07 world champion Steve is one of eight VI athletes competing over two categories: VI1 and VI2/3.

Athletes competing in VI1 must wear blindfolds or black-out glasses while competing. Both VI1 and VI2/3 athletes use tactile sights and are permitted an assistant sitting or standing one metre behind the shooting line. Steve is competing in the VI2/3 event.

“I’m just really looking forward to the whole event,” he says, during unofficial practice day. “It’s going to be good.”

Steve’s archery journey began back in the late 90s.

“I started with a longbow. One of my friends used to shoot at Wolverhampton Company of Archers and I went down to the club, they fitted me out with one of the club member’s longbows.”

“I literally just stood in front of the target and had a blast.”

He says he’s got about 10 degrees field of view, meaning his vision is like looking through a pinhole, and about “three or four foot” depth.

“After that everything is blurred,” he explains. “I can’t see the target.”

Steve’s condition also comes with symptoms of photosensitivity, photophobia, cataracts, stigmatisms and scarring – as well as the tunnel vision.

“I had no idea about anyone else who shot a bow that couldn’t see, because it’s a ridiculous thing when you think about it!”

Shooting his longbow, Steve saw archery purely as a recreational activity. But he was soon contacted by a coach in the area who worked with British Blind Sport, and his competitive instinct won through.

“It became about learning about archery, and I’ve always been fairly competitive.”

He picked up a recurve and then soon progressed to compound.

“It’s about personal challenges and setting goals, not beating anybody,” Steve says. “I’m a bit obsessive compulsive about it.”

As he talks about his competitive nature, Steve’s wife Lesley nods her firm agreement. “It really is hours and hours. At least five days a week, eight hours a day,” she confirms. “This is Steve.”

The pair’s relationship is that of a married couple, and more.

Lesley is Steve’s spotter, assistant and greatest supporter. She drives him to practice, stays with him, picks him up, takes him to get equipment… “everything I possibly can,” she says.

Steve and Lesley, a former archer, funded the trip to Donaueschingen themselves. Having known the work behind put in to get the category back into the event, the pair said they were keen to participate, not least because they had such fun at previous worlds.

“I think it needs the national organisations to get involved now,” says Steve, explaining his hope for awareness and participation in visually impaired archery to grow.

“It’s taken a lot of our money to come to Germany in the hopes that some national federations could take it up and we could be looking at Tokyo in 2020.”

“Although I doubt I’ll be shooting then,” he admits, laughing. “Might have put my bow up to rest. Standing in a field in the wind and cold has taken it’s toll.”

The enthusiasm for the sport evident in Steve’s smile says quite the opposite.

So does the thought he’s put into preparing himself to compete at a high level.

“We’ve had a lot of help from people at the club, with equipment and setting the stand up,” he explains. “We’ve developed things a lot over the last seven to eight months.”

The stand is a visually impaired archer’s sight.

Many use frames with foot- and side-plates, with poles from integrated camera tripods, which locate both the athlete’s position on the line and give them an aiming point.

Visually impaired archers use a tactile sight – a pin or rod – on the stand, which they press into their bow hand to consistently aim.

“I found that if the stand is not dead straight, you’re constantly fighting with it,” Steve says. “One of my friends, who’s a lot cleverer than me, is an engineer and worked out that if you’re 0.2 degrees out at this end, it’s six inches at the other end.”

“So it doesn’t take much when it’s a windy day.”

He also explains that he struggled to get the footplates in the correct place if the ground was the slightest bit uneven.

Steve’s solution? “I put the stand in now and move myself around it.”

The stand is a tripod with a normal compound sight attached at the top, but instead of a scope there’s the tactile pin that Steve locates in between his third and fourth knuckles when at full draw.

He puts two target pins in the floor, which he feels under his toes, to be sure of standing in the same place for each shot.

“I find it more adaptable,” he explains. “If the wind starts going to the right, I can just move my pins.”

During classification in Donaueschingen, the process that defines which category athletes compete in, Steve was classified as B3: vague vision but no clear view of the 80cm target, 30 metres away.

“I think it’s easier because I can’t see the target. I haven’t got the worry. It’s all about this end,” he says, pointing at himself. “The technique, the feeling and years and years of constant practice.”

And Steve knows his own technique, through and through.

“I put a bit of tension in my body, twist slightly and go forward slightly towards the pin. As I’m drawing up, my body’s just set now – and I know where that pin is.”

Each visually impaired athlete has their own aiming procedure, but the rules allow them one point of contact with their tactile sight.

“My middle knuckle gives me the height and body movement the left and right.”

Steve shoots, then Lesley calls his arrows on the target.

“All Les can tell me is where the arrows have gone. Ten ring is the one I like to hear!”

There’s no coaching, no assistance other than that, and though they can change the sight in between ends, there’s usually no need because it’s set up correctly.

Steve’s dedication to his passion is inspiring.

“My thing is that you use what you’ve got to the best of your advantage,” he says.

In Germany, Steve will use what he’s got to try and achieve one simple goal: “Win the gold.”

“If I don’t then congratulations to the person that does,” he continues. “As long as I shoot the best I can, everything’s fine. If someone beats me, they beat me.” 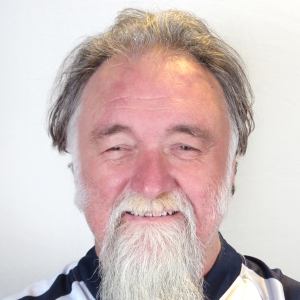