Simon Fairweather, 20 years on: Where is the Sydney 2000 Olympic Champion now?

Simon Fairweather has dedicated more than 30 years of his life to archery.

He became world champion in 1991 but that’s not why most people in the sport remember him. His career culminated in winning the most important of all titles – Olympic gold – on home soil in Sydney.

Simon started shooting a bow when he was 14. He competed at his first Olympics in Seoul five years later in 1988, finishing 16th.

He was only 22 when he took individual gold and led the Australian men’s team to bronze at the World Archery Championships in Krakow​.

“My first memory [of Simon] goes back to the world championships in 1991 when he won,” says Seb Flute, France’s Olympic Champion from 1992. “I had already been impressed by his ability to maintain momentum until the very end.”

As the reigning world champion, expectations were high when Fairweather arrived at the Barcelona Olympics in 1992. But he failed to make an impression in matchplay.

Simon and the Australian squad came closer to the podium four years later. They made the semifinals of the team competition but lost to Korea and then Italy in the bronze medal matching, coming fourth.

As Australia’s home Olympics loomed in 2000, the country had never won a medal in archery at the Games.

They prepared to change that statistic under coach Kisik Lee, one of the first Korean officials to work abroad. Simon spent two-and-a-half years preparing, full-time for his fourth Olympic Games in Sydney.

“That day, [Simon] was the best of us all. And for the sport of archery, maybe he was the best man to be crowned champion that day, a true champion,” says Dutch archer Wietse van Alten.

Simon and Wietse met in the semifinals of those Games. Their match went to a shoot-off. Wietse shot an eight in the tiebreak.

It is to this day, Wietse says, the one arrow of his career that he would like to re-shoot.

US archer Vic Wunderle was Simon’s opponent in the final.

The wind had changed between the two matches and it took Vic some time to adjust. Simon had a better understanding of the local conditions and, at the same time, was shooting very well.

In front of a roaring home crowd, Simon Fairweather won his home Olympic final by a large margin, 113-106.

“I went to five Olympic Games in all and, perhaps it was due to the Sydney Games being a familiar one in terms of people and location, I really felt it was a happy and friendly and genuine one,” he says.

“There is no greater honour in competitive archery than to win an individual Olympic gold medal in your home country,” says Vic. “Simon’s victory was a big win for archery in Australia and across the world. Some of the influences are still being seen today.”

He made a comeback to attend at his fifth and final Olympic Games in Athens in 2004 and then retired again after the world championships in Madrid in 2005.

After decades representing Australia at international archery events, he says he grew tired of his relationship with team management and the new era of athlete responsibilities and agreements.

In 2009, following years working as a jewellery designer, Fairweather acted as coach of the Australian national team for two-and-a-half seasons.

“We had some success during that period but also a lot of conflict. There were many agendas from many sources and I just couldn’t make it work,” he says. “I know if I was tasked with role again I would play it very differently.”

Over the years, Simon has dabbled with a return to the sport. He won some medals at the Australian national championships in 2014 but tragically lost his wife soon after and again withdrew from archery.

In recent years, the name Fairweather has resurfaced.

It’s not on results sheets from competitions but on a product, developed and produced by Simon and his partner Nicky from their country home near Adelaide and shot by some of the world’s best archers.

“We have a cool little workshop that I built at our home and we are proud that we use local suppliers for almost all our materials,” says Simon.

The tab leather is available in kangaroo. The casts for the moulds and everything from design to packaging is done by the couple. Simon uses his training as a jewellery designer in building his products.

Wild animals, like koalas, often visit the house – and they are surrounded by hills and the beautiful landscape Simon needs to enjoy his motorcycle.

In 2016, Simon and Nicky shot the World Archery Field Championships in Dublin. It was the first international tournament this Olympic Champion had competed in for over 10 years.

The standard, depth of talent and atmosphere around the event had changed.

“Although I think I definitely had periods where I felt I was among the best in the world, I don’t know if I’d be competitive in this era,” he says.

“The climate is much different from when I competed. The scrutiny and focus on high-pressure scenarios take a special type of person to thrive, I suspect.”

Simon has transitioned from champion archer to coach to business owner – and to fan. He’s regularly been spotted spectating at international events since launching his product line.

Twenty years on from his Olympic gold, the Fairweather name very much lives on.

Thanks to Simon, Nicky, Seb, Vic and Wietse for their help producing this article, and Yoshi Komatsu for providing photographs. 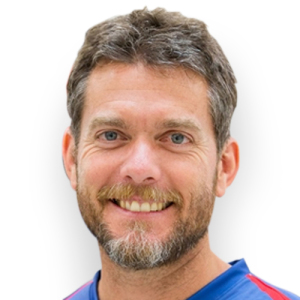