John Cavanagh’s shoulders aren’t what they used to be.

The repetitive strain of archery will do that to a person. Cavanagh, 64, represented Great Britain from the Sydney 2000 Paralympic Games through to Rio 2016, setting a points record in 2004 on his way to gold and following that up with a silver medal in Beijing in 2008.

After competing in five successive Paralympics, he had his heart set on retiring at the conclusion of the Games this summer in Tokyo.

But with the Paralympics now postponed until next year due to the COVID-19 pandemic, and with no sign of his ongoing shoulder injuries letting up in sight, Cavanagh announced earlier this month that he has decided to call time on his career.

“I just physically can’t shoot anymore,” Cavanagh said. “It’s very, very painful, and it inhibits all of the muscle activity. It’s just really difficult for me to hold a bow up nowadays.”

Cavanagh tore a tendon in his left shoulder a few years ago, and he has sustained similar damage on his right-hand side as well.

He would have been willing to endure the pain under normal circumstances, he said, but after evaluating his personal health and the questionable state of the Paralympic Games, the only conclusion he could come to was to retire.

“I just didn’t see any point in trying to push through to next year with pain killers and so on just to struggle through,” Cavanagh said. “That’s not how I want to carry on.”

Cavanagh’s introduction to archery followed a skiing accident in 1989, when he underwent rehabilitation for a spinal cord injury sustained after falling down a cliff in the Swiss Alps.

A gradual improvement to his health allowed him to begin practicing with the British Wheelchair Archery Association, and his involvement with the sport grew from there.

By 1995, his natural talent and love of competition took him to the European Championships in France as a member of the para archery team. He soon became an ambassador for Archery Great Britain and Paralympics Great Britain.

Cavanagh has participated in every World Championships since they started in 1998 in the compound men W1 (wheelchair) category. After sustaining an injury that took away so much, archery helped fill the void, irrevocably changing the trajectory of his life forever.

“I never thought of myself as being an international athlete,” said Cavanagh, who was 33 years old when he first started shooting. “It wasn’t a planned thing. I never intended for this to happen.”

Cavanagh claimed Paralympic gold at the 2004 Athens Games, winning the men’s individual W1 archery competition with a 108-102 victory over Sweden’s Anders Gronberg. The performance rounded off a memorable competition for Cavanagh, who set a Paralympic record of 164 points in the first round.

After his success in Athens, Cavanagh collected silver at the 2008 Games in Beijing and later reached the quarterfinals when London hosted the Games in 2012, creating a homely atmosphere for the well-traveled veteran.

It was at those Games where Cavanagh witnessed the Paralympics reach a level of prominence that rivals the Olympics. There was little enthusiasm and plenty of empty seats at the 2000 Games in Sydney, he said. But 12 years later, in London, both archery venues had capacity crowds throughout.

"One of the great things about archery is that it doesn't really matter who you are, you can be on the same path as an Olympic champion," Cavanagh said. "There's not that many sports where you get that much integration."

Indeed, over the span of three decades, Cavanagh has witnessed the evolution of the Paralympic movement and archery’s place within it. The transfer of governance from the International Paralympic Committee to World Archery, he said, has resulted in para archery’s enviable status as a division that is fully integrated worldwide.

“When I first began, we had the World Championships and the European Championships, and that was it. There were no other international tournaments available,” he said. “But as the years went by, they increased. Now we have a calendar and a regular circuit we go on, and hopefully that will continue to progress, too.

“Without these international events, you can’t progress, as an athlete or as a sport, nearly as fast as you do with them,” Cavanagh continued. “That helps the sport grow internationally.”

He leaves a sport and a movement that are stronger now than when he entered it.

“John’s knowledge, experience and passion for the sport, not to mention his achievements within it, are outstanding,” Tom Duggan, Paralympic Performance Manager, said in a news release. “None of us would be here, doing what we are privileged to do as a staff and athletes, without the hard work and achievements of people such as John, so we owe him a big debt of gratitude.” 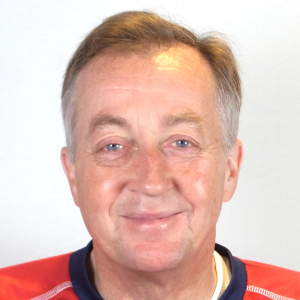