Ketevan Losaberidze, 40 years on: Where is the Moscow 1980 Olympic Champion now?

The 1980 Olympic Games in Moscow were the third since archery’s reintroduction to the Olympic programme in 1972.

It was a strange period in history. Amid tensions between the Soviet Union and NATO countries, the USA was among the teams to boycott the 1980 Games – and many of archery’s modern contenders from Eastern Europe did not yet exist.

Ukraine, Belarus, Moldova and, notbale for this story, Georgia were all part of the Soviet Union, which hosted the Olympics.

Ketevan Losaberidze was 31 years of age when the Games in Moscow were held.

Born in Tkibuli, a mining town in the mountainous middle of Georgia, in 1949, Losaberidze took up archery as a student in higher education in 1966. Her rise to competition success was fast.

She was Georgian champion in 1967 and competed as part of the region’s team in competitions across the Soviet Union – eventually earning an invitation to join the national team in 1971.

“I won individual and team gold at the European Championships in 1972," she recalls. "At the Olympic Games in Munich, I was fourth, and only one point behind third."

Munich 1972 brought archery’s much-heralded return to the biggest sporting event in the world, and Losaberidze finished just off the podium – behind another Soviet archer in Emma Gapchenko.

One year later, and less than seven years since she started archery, Losaberidze won a team world title and the Soviet Union’s national championships.

“That same year, I got married and stopped practising sport actively," she said.

Losaberidze began working at Tbilisi State University, in the department of mathematics, instead. But her passion for the sport never waned. In 1978, her love for the archery intact, she returned to competition.

"I always aspired to the main goal of any athlete: to climb the top step of the Olympic podium," Losaberidze said.

The Soviet archery team for Moscow would consist of two men and two women.

Natalia Butuzova, who currently coaches the women in Germany, was the favourite. Losaberidze ranked second. But two weeks before the Olympics, the coaches decided to replace her with Olga Rogova.

“This really outraged me. According to the rules, we had to shoot control competitions. With a huge advantage, I won them – and I kept that attitude until the Games themselves,” says Losaberidze.

The Olympics in Moscow were decided on a double 1440 Round (or double FITA, as it was known back then).

Women shot 36 arrows at each of four distances – 70, 60, 50 and 30 metres – for each of the two rounds. The competition took four days, and the total score at the end of the fourth day would decide the winner.

Only four women shot more than 1200 points for the first round. Butuzova was one of them, in second with 1251, and Losaberidze was another, sitting in first on 1257 points.

“In the second half of the fourth day of competition, during shooting at the last short distance, the weather deteriorated sharply. A real storm began with heavy rain,” recalls Losaberidze.

“We had to shoot because the signal had already been given. In these difficult conditions, Natalia lost stability but I did better because I had prepared best. This made me the champion of the Olympic Games.”

After all 288 arrows and four days of competition, Losaberidze’s 2491 points had won her Olympic gold in Moscow.

It is the only gold medal the Soviet Union won in the archery competitions at the Games before it ceased to exist as a team in 1991 – and Losaberidze is one of only 94 athletes, and one of two archers, from Georgia to climb the podium at the Olympics.

(The second is Khatuna Kvrivishvili, better known as Khatuna Lorig, who won team bronze as part of the Unified Team at Barcelona 1992.)

“I am proud not only of having won Olympic gold but also of the fact that since archery was put back on the Olympic Games in 1972, I am the only Olympic Champion among the women from Europe,” says Losaberidze.

In response to the USA boycotting Moscow in 1980, the Soviet Union boycotted the Games in Los Angeles in 1984. This meant that Losaberidze was not given the opportunity to defend her title.

It is fair to wonder whether archery’s history might have been altered had the Soviet Union competed.

Los Angeles 1984 brought about the dawn of the era of the Korean women’s dominance in Olympic archery, with Seo Hyang-soon claiming individual gold and justifying Korea’s significant domestic investment in the sport.

Would that investment have continued – or been tempered at an early stage – had the podium in Los Angeles been more hotly contested by a competitive Soviet squad?

“Unfortunately, the period of my career coincided with the period of the so-called Cold War between East and West. This really influenced athletes, including me,” says Losaberidze. “In my opinion, sport should be the ambassador of peace, love, joy, happiness and health all over the world.”

The 1980 Olympic Champion’s last international competition was the World Archery Championships in Punta Ala, Italy in 1981.

She was active in protests for Georgia’s independence from the Soviet Union while working in the mathematics department at the university in Tbilisi, where she remained until retiring in 2005.

The Georgian archery federation was founded in 2002 with Losaberidze as its first president. She left that post in 2005, too – but is still active in archery, often presenting prizes at tournaments.

And traditionally, the last archery competition of the year – the final of the Georgian Cup – is called the ‘Ketevan Losaberidze Cup’.

Thanks to Artem Sanishvili for translation assistance. 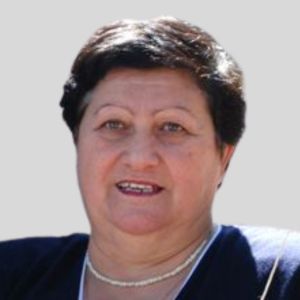