After first making Korea’s national squad in the 1990s, Oh Kyo-Moon was part of the team that won the world title in 1995. His greatest triumph as an athlete was winning Olympic team gold at Sydney 2000, following four years later with team silver and individual bronze in Atlanta.

Oh held the 144-arrow ranking round world record for nine years, from 2000 to 2009, and is well known among older archery fans as being perhaps the first ‘cool’ Korean on the circuit. He had an effortless style and swagger that endeared him to many.

“What’s the difference between the archers of my generation and the archers of today? I think the standards are much higher now. You can tell by the scores. The equipment is better than it was in my day; particularly the limbs,” he says during ranking round day at a Hyundai Archery World Cup stage in Antalya.

After retiring from archery, Oh was one of the many archers who followed a path into coaching.

“The usual path for coaches is that, when an archer is coming close to retiring, they will go and coach at an elementary school or a middle school, although some will go straight to company teams,” he explains.

“It really depends. Most coaches focus on a single team, which could be two or 10 people.”

“Of course we have a lot of the best coaches in Korea, as well as the best archers. We have many archers, so of course we need many coaches.”

In 2006, Oh became an Australian citizen in order to coach the Australian team, part of a large exodus of Korean coaching expertise that started to fly round the world in the 2000s.

Returning to Korea in 2008 to study for a doctorate, he became a national junior coach and then the coach for Ulsan City pro team in 2013.

In 2016 he accepted a contract to coach the men’s senior national team, fresh from their victory in Rio. He took over the role from Park Chaesoon, always the loudest voice on the archery field.

But the abundance of quality coaches in the country means that uniquely amongst major archery nations, the Korea Archery Association has a rule to reselect its national team coaches every two years.

“Each coach covers two complete seasons, leading up to the big championships. My current contract is up to the Asian Games. After that, I’m not sure [about Tokyo 2020],” says Oh.

“There is a system of course, but every coach who comes in brings something new, a new plan or a new system. That keeps it moving.”

I ask whether it is better to wear the shirt as an athlete or as an archer. He smiles.

“When I was a player it seemed like the greatest opportunity in my life, and I took it. Now it is a different opportunity, but still a great one,” he replies.

“You’re still part of trying to make a great result.”

With three of the most decorated veterans in history in the men’s four-man recurve team for Korea in 2018, it is – on paper – one of the best of all time.

“It’s always the best four archers [in any given year], and everybody [in Korea] is such a high standard now. And we have a new facility [at Jincheon, the new Korean Olympic training facility] which is amazing,” says Oh.

Coaches and archers live at the centre for around 280 days out of the year, travelling home for weekends.

“Korea is really a four season country, and the winter is hard. Before [at Taerung] we shot indoors to outdoors in the winter. Now we can shoot 70m indoors.”

Oh Kyo-Moon remains at the forefront of Korean archery, which is starting to move beyond its successful, but elite confines:

“Archery is changing in Korea. Of course the Olympic success is known, but the television channels are now starting to show interest outside the Olympics and the Asian Games. It’s important for raising funds too, of course.”

My last question to this legend player turned coach is what comes next.

“I don’t really think about other jobs. Archery is my job,” he replies. 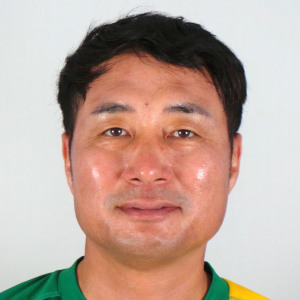