Archery, the second sport to start at the Rio 2016 Olympic Games after football, opened with a bang. Kim Woojin shot a new world and Olympic record during the 72-arrow ranking round with 700 points out of a possible 720; one point more than Im Dong Hyun’s previously world-leading mark shot at London 2012.

World number one Kim Woojin broke the world and Olympic record just as he said he would earlier this year during the Hyundai Archery World Cup stage in Medellin.

After admitting it was the pay-off for his extra work ahead of the Games, he said he’d already moved his thoughts on to the team competition where Korea is seeded first, with a bye into the quarterfinals.

“Tomorrow there is a more important match. In terms of celebrating today – I want to focus on tomorrow’s match,” the Korean men’s team captain said.

David Pasqualucci, the rookie on the Italian men team, was shocked and impressed with his first ever Olympic performance, one that he said boosts his confident for the team and individual matches ahead.

“I can’t believe what I did here today,” said David, with a big grin on his face. “I’m very happy. My hard work and play was done and now, with my teammates and coach, we will try to keep the good work. With my ranking and team position, the brackets could be good.”

“We want the medal and this starts a good track for us.”

Brady, the most experienced archer on the USA team, shot a 690-point round he thought could have been five or six points better.

“It feels good, shot good, we had good weather today,” the three-time Olympian said. “I really think that everybody on this field should have shot five or six points better, even Kim Woojin. I really feel the performance he did today was 705 or 706. The platform was moving just enough to open everyone’s group up just a little bit, so the fact that he shot a world record is even more impressive.”

Dutch man Sjef van den Berg took silver in 2015 at the Aquece Rio test event prior to the Games.

The young man sat one point behind Woojin after the first half, then, in the second, he fell a little behind, still shooing 684 – good for the fourth seed – his third best result in competition, he said.

“The shooting was good in the first half, in the second it was a little less. I think it was mainly because of my energy level being too low. I got really sick two days ago and just didn’t have the energy to shoot the second half as good as the first one,” Sjef explained.

Atanu Das, India’s sole man in Rio, was seeded fifth. The 24 year-old man had something else to celebrate rather than his own results…

“It was good for me but I’m happier for Kim, he shot the world record,” said Atanu. “I wish I did! For my first Olympics I think my ranking round it’s good but here everyone else is too, it’s not going to be easy.”

Kim and Atanu shot against each other for bronze at stage three of the 2016 Hyundai Archery world Cup – which ended in an incredible shoot-off. Kim won that tiebreaker, but by millimetres, if anything!

London 2012 silver medallist Furukawa Takaharu finished seventh. His thoughts on his performance had an interesting twist.

“I feel relieved! I will not shoot against any archer from Korea until the semis, so I’m super happy,” he said. The seeds slot into positions in the brackets, and Furukawa had checked his potential path to the finals. “I didn’t want to [meet them] and finishing seventh helps me.”

It wasn’t a good a day for European Games Champion Miguel Alvarino. The Spaniard shot some low arrows, even one miss, in the first half – which positioned him lower than he expected.

“It was pretty bad. I had some back luck, had three bad arrows and I missed one because I pressed it too much. I had all the cameras behind me and I got nervous,” he explained.

“It was also bad luck. I had arrows very close to the 10, but millimetres count and they scored just nine. I hope tomorrow with the teams this doesn’t happen again and then, in individuals, I hope to do better than today as well.”

Alvarino’s teammate, Juan Rodriguez, had a better day. He was in the top three for much of the round, eventually settling in to rank 10th.

“It’s something less to worry about, now the fun really begins and I’m looking forward to it,” he said, referring to the ranking round.

“As a team, we are feeling great, although my teammates had some bad shots today. We all have bad days… The most important thing is to leave those moments behind and stay positive for what tomorrow brings.” 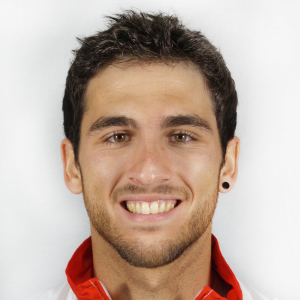