“What are my memories of the Olympics? Passionate excitement. Whatever I saw and wherever I went, the Games always gave me this incredible, thrilling feeling. The surrounding environment, the people, the smells and everything else were all so unfamiliar and new, but I was happy there, right inside it.” – Lee Sung Jin

Like most Korean archers, she first picked up a bow at school – but archery was, at first, just another sport.

It was a coach who saw her potential: “I enjoyed many sports, but I ended up transitioning to archery from athletics. My coach always trusted me and drove me forward saying, ‘You deserve to be a part of the Olympics’,” she explained.

Lee first made the national team in 2003, aged just 19 and still in high school. She survived the highly competitive national trials, and made the Olympic team the next year. In Athens she placed second in the ranking round and moved easily through the field, surviving a scare against Wu Hui-Ju of Chinese Taipei in the quarterfinals, 104-103.

She ended up in the gold medal match against her compatriot Park Sung Hyun – also competing in her first Olympics and having set a world record in the ranking round.

Lee was leading by three points at one stage in the 12-arrow match, but Park came back to tie the contest with one arrow to go. With her last shot, Park scored a 10, but Lee only managed an eight. Park became Olympic Champion.

“Before the match I just said: let’s give it everything I’ve got here, but just enjoy it. My biggest mistake that day was mis-aiming due to not knowing the wind direction,” said Lee.

Two days later the Korean women’s team of Park, Lee and Yun Mi Jin scythed through the field to face China in the final at the Panathenaic Stadium – a matchup between the two countries repeated in 2008 and in 2012 in the same event.

China proved to be tough opponents, and it needed another 10 from Park Sung Hyun on her final arrow to clinch the match by a single point.

With two medals from Athens, Lee was on a roll. In 2005 she took the individual World Archery Championship title in Madrid. Then world number one, she also took the Universiade title that year, and two more titles at the Asian Championships in 2007.

But it’s always tough to stay at the top in Korean archery, and Lee hit some wilderness years.

“There was nothing that changed dramatically, but I had a reputation I felt I had to maintain,” she said.

After 2008, her form started to suffer, and eventually her shoulders, which had caused her problems since school days, gave up: “I went through challenges all athletes must deal with every once a while - slump and injuries. Plus I had to undergo shoulder surgery.”

She didn’t shoot for a year, and had to set herself a new goal: London.

“I had to battle with myself for two years during the rehabilitation period,” Lee recalled. “But with 2012 as my goal, as time passed by, my record improved significantly… After I’d hit the bottom I wanted to hit the top again!”

Coached by her former teammate Park Sung Hyun, Lee was back in full form in 2012.

The team heading to London – Lee, accompanied by Ki Bo Bae and Choi Hyeonju was undoubtedly strong – but as the senior Olympian in a culture which deeply respects hierarchy, Lee had doubts.

“Honestly, I felt pressured,” she said. “Of course, it was an honorable moment to be in a place where many people wish to be in, but it was indeed difficult to lead the team as an experienced Olympian.”

In London, in the individual competition, she fell to eventual bronze medallist Mariana Avitia in the quarterfinals, and a tearful Lee had to watch as Ki Bo Bae took gold.

But in a rain-soaked team competition, Korea again faced a tough Chinese team in the final - and once again, took the match by a single point with the last arrow. Lee had her second gold medal, and retired shortly afterwards.

These days, Lee is still shooting and coaching junior archers.

“I want to expand archery to a many people with the experience and knowledge acquired throughout my career. It’s a sport that increases in fun the more you learn about it, so I want the juniors to become an archer who knows how to genuinely enjoy it... I like people to know about the relaxation you get from archery, the emotional control, the strong mindset,” she said.

Lee Sung Jin remains particularly full of admiration for her Olympic teammates in 2004 - and together, the three are perhaps the strongest Korean women’s team of all-time.

“Who do I admire most? Park Sung Hyun and Yun Mi Jin,” she said. “They’re my role models and competitors – but also people who taught me valuable things. The most important thing for me is bringing the team spirit to my fellow archers.” 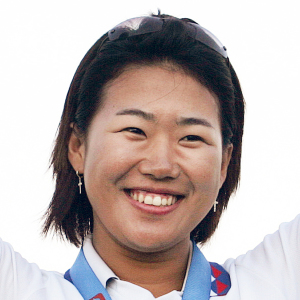