“Your basic skill needs to be very strong, your movement and your technique, but I think what makes an archer a champion is their psychological quality, and their confidence they give out, because this is what gives them the ability to control the match. You need to have ‘heart’ as an archer and as an athlete. This is what makes the difference.” – Zhang JuanJuan

One of China’s most celebrated Olympians, Zhang started archery at the age of 14, winning many national medals as a junior. After overcoming severe target panic, she finally made the national team in 2001, in time for a team home victory at the World Archery Championships in Beijing and an individual title at the Asian Archery Championships.

Her Olympic career started in 2004 in Athens. In the individual event, she made the last 16 but lost to eventual bronze medallist Alison Williamson by four points.

In the team event that year, China’s women, anchored by He Ying, faced a dominant Korean team, who nonetheless had shot some loose arrows in hot conditions in the Panthinaikos stadium. The Chinese women ran the Koreans very close, with Park Sung-Hyun sending down a penultimate eight and needing a 10 on her last arrow to win. Under incredible pressure, she edged it in, and China took silver.

In 2008 in Beijing, the team was on home soil and expectations were high. China had pumped billions into their Olympic programme and built not one, but two enormous temporary archery stadiums.

On 10 August, once again China faced off against Korea in the women’s team final - and once again, Park Sung Hyun had the last arrow. But this time the Korean team was well ahead, and she needed just two points for gold. Again, it was a 10, winning the match for Korea, 224-215, and Zhang had a second silver team medal going into the individual competition.

Afterwards, she said of Park: “Under those circumstances, she could still hit the the middle? I really admire her.”

The individual competition looked as if it would follow the usual script. By 2008, Korea’s women had won six straight Olympic women’s individual titles over 24 years, the longest active winning streak in the Games for any sport. All three Koreans had cruised to the quarterfinals, and another clean sweep looked possible.

But Zhang had other ideas. Her shooting had brought the team close to victory, and she was on fighting form.

"I felt really pumped up when I was up against the Korean archers,” she said. “I had put in a lot of effort to compete with them. Even if I were to lose, I wanted to intimidate them with my performance."

On 14 August 2008, despite finishing just 27th in the ranking round, she strolled to the quarterfinals and beat Joo Hyun Jung 106-101, before pulling off another upset to beat Yun Ok Hee in the semis, 115-109 - matching the Olympic record in the process.

On a rain-swept field, she once again she faced Park Sung Hyun, but this time for indvidual gold. Park was the defending champion and an athlete whose final arrows had denied Zhang two Olympic team victories already.

Roared on by the home crowd, Zhang shot the match of her life. The women were tied, both on 101 points with 11 arrows shot, before the last decisive volley. Park shot first, and faltered, sending down an eight. The door was open, and Zhang’s nine was good enough. She was Olympic champion, and had pulled off the extraordinary feat of beating all three of the Korean team in the process.

“I had developed an incredible concentration, and was just totally immersed in my own mind. Sometimes I couldn’t tell if the match was actually finished, because I was just totally focused on the game. I knew my opponents were very strong, but I was totally confident that I could do better than the opponent.“

Zhang retired from archery in 2010, the bow she used to win gold in Beijing now hangs in the Olympic Museum in Lausanne, and she now manages a sports centre and the archery development programme in her home city of Qingdao. She was briefly tempted back to picking up her bow for a televised game show in 2015.

Her extraordinary win in 2008 is a testament to the power of confidence and belief: "I dreamed I could win a gold medal every day. I was well prepared. It was a hard journey but, finally, I made it." 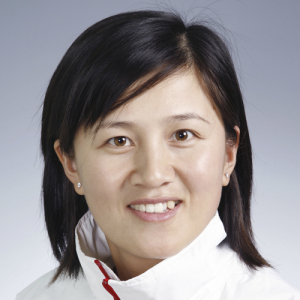