It’s been just over a year since Phoebe Paterson Pine won gold at the Tokyo 2020 Paralympic Games.

The joy of such an achievement evaporated shortly after. The 24-year-old archer from Great Britain, currently world ranked number one in the compound women’s para category, revealed she suffered from depression and anxiety.

It should have been a long-lasting moment of glory.

“I do not remember knowing what I exactly needed to do to win. I just remember being very nervous on my final arrow and thinking, ‘just shoot this shot the very best you can and see what happens’,” recalls Phoebe, who has spina bifida (an underdeveloped spine).

She defeated Mariana Zuniga from Chile, 134-133, to take the gold in Tokyo, her first medal in world competition.

“As soon as I realised I won, I started crying. All the emotions just came out. I was very emotional about that. Aside from that, I felt so proud of what I achieved and thought like I had got to the point of my career where I was thinking, ‘yes, this is who I am and I am good enough for this’,” she says.

For someone who struggled with mental health, it was a huge boost in motivation.

“Since then, I felt like I have become a lot more confident in myself. I have a lot more belief that I can achieve anything that I put in my mind. I think I also have more push to succeed and I am more hungry to win than I was before,” says Phoebe.

A year of brilliant results followed, but Phoebe still suffers with anxiety.

“I realised I need to talk to somebody about how I was feeling,” Pine said. “It is so different to anything else. You live with a brain that tells you there is something wrong with you 24-7. It is really hard to live with sometimes. And it made me depressed, as well.”

“These two went hand in hand. And it was not until 2021 that I reached out and got the help I needed. I still suffer from that, I am still on antidepressants and I am still fighting that.”

The tonic of phenomenal success – like the Paralympic win – doesn’t result in an easy fix.

“I think it made me feel better about myself, and more confident but as it is with anxiety, something good happens and your brain immediately assumes that something bad is going to follow. When I won the Games, even though I was extremely happy and excited, I still had that looming anxiety that something bad would follow,” she explains.

“I had to deal with that quite a lot and it really stopped me from enjoying the moment. I can remember I was happy for maybe 24 hours after I won. After that, I immediately felt anxious.”

According to the World Health Organisation, around 280 million people live with depression – that’s almost 4% of the global population. Many don’t talk about it.

“I have days when it is really hard just to get out of bed,” says Phoebe. “The one thing that keeps me going is the fight to win and to get better in a sport that I do. When I wake up in the morning and feel I cannot get out of my bed, I remind myself of what I achieved even when I felt down.”

“That spurs me on to get up and go on with the day. To be the very best I can be, towards the next goal of going to Paris.”

Pine has taken medals at five consecutive events since 2020, when she reached out for help with her anxiety. As well as the win at the Paralympics in Tokyo, she also finished third at the para worlds and won the para Europeans in 2022.

“I have worked on myself since the Games. I worked so much in terms of mentality and the psychological side of the sport. That has really helped me to calm the downs, to almost switch off the chatting, annoying parts of my brain when I compete,” she explains, continuing honestly about the link between her physical condition and her mental health.

“I have come to terms with my disability but I have not necessarily come to terms with the fact that I have a body which can easily let me down. And that does trigger health anxiety quite a lot because of never knowing what is going to happen next.”

Pine’s commitment to the sport of archery has put her firmly in control of her own progress.

“Going way back to prior to starting archery, I felt so low about who I was. I never really knew what I was going to do with my life,” says Phoebe.

“Finding archery was that escape which I needed. I almost felt that I fit in better than anywhere else in society. Because of finding the sport, I was able to realise I was able to go out and achieve anything that I put my mind to. That gave me real confidence and something to want to go out and get.”

Pine’s ability to reflect on her own mental condition, and the need for positive goals, is inspiring. It’s certainly not limited to para sport, either.

“Being or becoming a disabled person is not the end of life. It still goes on. Even if it feels bleak and you do not what to do with yourself, there are still ways of living prosperous and full life. And sport allows people to do that.”

Born with an impairment and boundless potential, Phoebe is one of many para athletes who found a purpose in sport.

“Archery is so inclusive that really anybody on the planet can take part,” she says.

“And there is always a way of adapting to make sure that people with impairments can join in.” 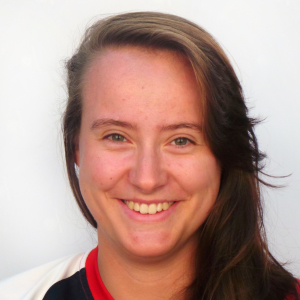