Sam Tucker has been a competitive archer for only 17 months.

She, along with teammate Lia Coryell, set three goals when she started: to make the USA squad, then the World Archery Para Championships team – and then shoot at the Paralympic Games.

Tucker is an Air Force veteran who lost her left arm in a motorcycle accident. Coryell is an army veteran in a wheelchair who has battled multiple sclerosis for nearly three decades.

The duo motivated one another. They moved to Colorado Springs for seven months where all they did was shoot and sleep.

“We walked away from there with a wonderful work ethic and an understanding of needing a coach that can work with adaptive athletes and what not to do, which is just as important as what to do,” Tucker said.

Coryell qualified for the Paralympic women’s W1 competition, but it took longer for Tucker in the compound women’s open event.

Team USA had an opportunity to win slots during the Toronto 2015 Para Pan American Games, but did not claim any. The team had another chance at during the Final World Quota Tournament in the Czech Republic in May.

They missed a slot by one place and sat in the alternate position.

Internally, the team had a trial of three archers in contention for the compound women’s open spot, if one became available. Tucker won that by a third of a point.

Then she waited for a call.

She knew it could come around 21 July, so she highlighted the date in her calendar and wrote down: “I find out I’m going to Rio.”

“I then began visualising finding out and what it would feel like,” Tucker said. “On 18 July, I started to get a tingly feeling and thought ‘this is what it’s going to feel like, I’m getting really good at visualising’.”

She brought her phone to the toilet in case it rang… and it did. Head coach Randi Smith was on the line and asked: “Sam are you sitting down?”

“She told me the slot came open and I was going to Rio,” Tucker said. “I proceeded to cry a lot. It was an enormous accomplishment but extremely overwhelming.”

Tucker had three more weeks to train with her coach, MJ Rogers. She would send Rogers videos over Skype and he would give feedback.

Now that she’s in Rio, Tucker wants to have fun.

“I am so proud to be a part of this team,” Tucker said. “It fits. We have four history makers here.”

Michael Lukow is the first amputee soldier to represent the USA in the recurve men’s open event. Andre Shelby is the first African American in the compound men’s open, and Coryell and Tucker are the first women from the States to compete in the W1 and compound open, respectively.

“I’m surprised that it took so long for the four of us to be the first,” Tucker said.

“I just want every woman, every adaptive athlete, every injured person out there to know that the celling’s broken, we’ve paved the way and please join us.” 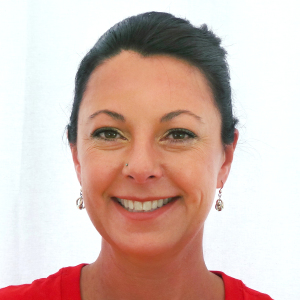