I want girls to see it can be done, says Lisa Coryell

At the age of 50, not only is Donaueschingen 2015 the first time Lisa Coryell has left her home country but it is also the first time she has owned a passport. A daunting prospect to face on the eve of the biggest archery event of her year.

Even before stepping onto the field with an eye on overcoming some of the best para archers in the world, Lisa already had to conquer a fear of flying and the new experience of acclimatising to an unknown culture.

It is a situation she did not expect to be in, after only taking up the sport a mere 14 months ago.

“Not in my entire life would I think I would be wearing the colours of the United States with my name on the back,” she said. “The whole flight, getting my equipment and then getting acclimated to new surroundings was a big thing for me.”

Having made her debut for the USA team earlier in the year at the Arizona Cup para event, Lisa is the nation’s only women’s W1 athlete in Donaueschingen. She competed with the men in Arizona and placed third.

The chance to compete against other women is important for Lisa, who’s known by friends and teammates as Lia.

“The travelling is a challenge in itself, but it will be good to come here and compete with other females. It will also be a good experience because I always shoot with the men back in the United States.”

Lisa served in the United States Army and became quadriplegic when an anthrax vaccine settled in her brain. She has used a wheelchair since around 2011.

“It caused an anthrax reaction, which is similar to ALS or MS, and I’m terminal,” she explained. “It will continue until I can’t breathe anymore but that day isn’t today. And I’m not going to worry about it. That arrow hasn’t been shot.”

In Germany, Lisa’s got her eyes on competition, winning a qualification spot for Rio 2016 and doing her son proud. He’s in the army and Lisa said she shoots for him.

“I was an army vet and got hurt working and there are other women out there with pretty significant injuries. If I can do it, I want people to see they can as well. That’s my goal.”

If Lisa can board the plane to Rio in the summer of 2016, that fear of flying will be long gone. 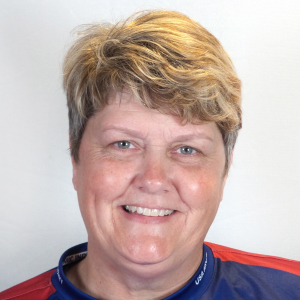